Manchester United’s players made their way to The Cliff on Wednesday morning for a final training session ahead of the Manchester derby.

United abandoned their Carrington training ground after a litany of bad performance and are practising at their old training ground as Ole Gunnar Solskjaer tries to underscore what he expects from his players ahead of tonight’s derby.

Sir Alex Ferguson moulded his great sides of 1994 and 1999 at The Cliff before United moved to Carrington in 2000.

Solskjaer hopes that training where so many United greats were formed will inspire his players after their recent dismal run of form.

United have lost six of their last eight games in all competitions, going out of the FA Cup and Champions League in the process.

Jesse Lingard and David de Gea acknowledged fans outside the hotel with thumbs-up gestures while Romelu Lukaku and Ashley Young made their way onto the team bus listening to music.

Solskjaer confirmed in an interview with Sky Sports on Tuesday that he will make changes to the team that was hammered by Everton on Easter Sunday.

“Of course there will be consequences,” the Norwegian responded when asked by Gary Neville how he will go about picking his side for the derby.

He added: “We’re not going to see the same team.

“We had a plan before the (Everton) game how we’re going to look against City anyway and some decisions would have to wait.

“We had a plan anyway and those two plans (Everton and City) weren’t the same.”

Manchester City manager Pep Guardiola claimed that a number of sides are still in with a chance of winning the Premier League title this season, following his side’s resounding 3-1 Premier League win over Manchester United.

The Citizens got the game off to the perfect start, as David Silva gave his side the lead after just eleven minutes, before club legend Sergio Agüero doubled the scoreline just after the break.

United rallied and pulled it back to 2-1 via an Anthony Martial penalty, but City kicked things up a gear and sealed the win late on thanks to İlkay Gündoğan’s goal. 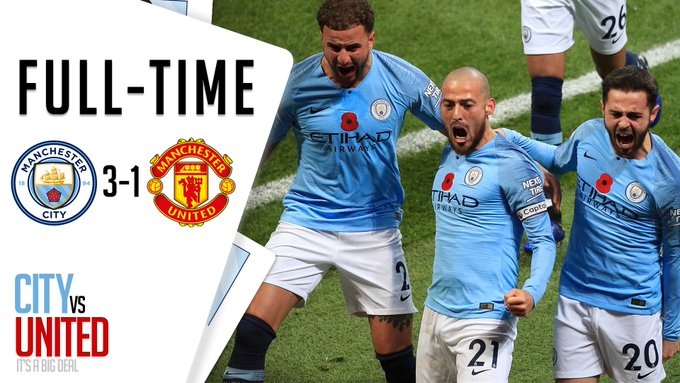 6,385 people are talking about this

Speaking after ​the big derby win, via Sky Sports, Guardiola was cautious when asked whether his side were odds on favourites to retain their title, and said: “I think ​Man City right now and Liverpool, Chelsea, and even Arsenal and Tottenham, I think they have numbers to be champions, not just City. We’re just two points in front.

“Last season we didn’t get points at Anfield, we draw this time. Last season we lost here (against ​United), but (this time) we won. So it’s good, four games against contenders, three away just one at home. What is important is that we are consistent, that we play most of the time good, and always I see many things that we can improve.” “We are scoring a lot of goals, make a lot of chances, concede few, and that is rhythm.”

City will head into the international break brimming with confidence after moving above Liverpool to go two points clear at the top of the table. Guardiola’s side will resume their Premier League campaign with a trip to the London Stadium, where they could face a tricky challenge against Manuel Pellegrini’s resurgent ​West Ham United side.

Sebastian Coe: Athletes should prepare for Olympics without spectators