West Ham could welcome playmaker Manuel Lanzini back in the team against struggling Fulham after a seven-month injury absence with a serious knee problem.

The Argentine midfielder ruptured his knee in June last year and was ruled out for World Cup in Russia.

The Hammers have lacked creativity since then and his return will be a boost for manager Manuel Pellegrini ahead of their Lonndon derby at home against Fulham.

However Pellegrini will miss Samir Nasri after failing to shake off his calf injury in time to face Fulham on Friday night.

The midfielder has made just three appearances since he moved to West Ham on a free transfer in December at the end of his 18-month doping ban.

Fabian Balbuena is also back in contention following a knee problem.

The Paraguayan centre-back, a summer signing from Corinthians, has not featured since the 2-0 home defeat by Watford on December 22. With both teams having been eliminated from the FA Cup before the fifth round, Friday’s fixture represents a first for West Ham and Fulham since February 9.

The hosts have climbed to 10th after consecutive 1-1 draws against Liverpool and Crystal Palace, while Claudio Ranieri’s struggling side are 19th and eight points adrift of safety after back-to-back defeats.

​West Ham have confirmed the signing of former Arsenal and Manchester City midfielder Samir Nasri, after the 32-year-old completed a successful trial period with the club.

With his 18 month suspension for doping offences lifted as of New Year’s day, speculation has been rife for weeks that Nasri was close to agreeing a short-term deal with the Hammers. 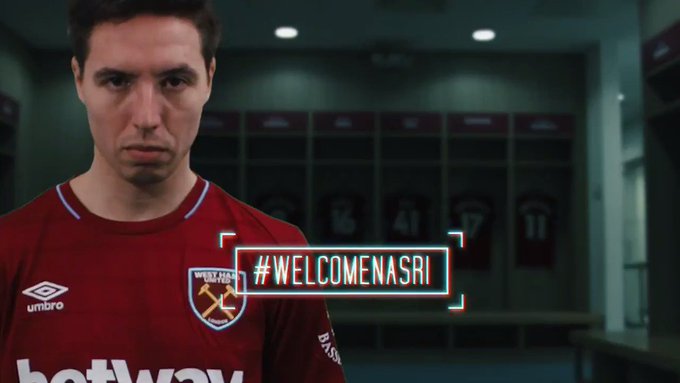 Reports turned into fact today, however, as the club confirmed in an official statement that the two-time ​Premier League winner has signed a deal initially until the end of the season, with the option of an extension.

“You choose a club and a project because of the ambition, and I think that ​West Ham has everything to be one of the biggest clubs in London, for sure,” Nasri told ​West Ham’s official website.

“Coming back to the most competitive league in the world, with a team full of ambition with a manager that I know. It’s the best job in the world, and I’m really excited about it.”

Manager Manuel Pellegrini, who worked with Nasri at ​Manchester City, added: “I am very pleased to welcome Samir to West Ham United.

“He is a player I obviously know well from our time together at Manchester City and I am happy to be working with him again.

“He has been working very hard here in recent weeks to build up his fitness and condition after a long period without playing, and he is now very determined to return to his best.

Following a successful period of training at Rush Green, the French midfielder has joined the Hammers on an initial contract until the end of the 2018/19 season, with the option to extend his stay in east London.https://www.whufc.com/news/articles/2018/december/31-december/hammers-sign-premier-league-title-winner-samir-nasri#PZ9BP8w8UUAbE9Xb.99 …

“Samir will give us another dimension in our attacking play. He is a very technical player, with excellent quality on the ball, and the ability to create big moments in important matches.”